“The incompetence, the damage, the failures of the worst Government in our history cannot be ignored.”

Fraser harnessed what he saw as his opportunity to catch Whitlam ‘with his pants well and truly down’. At 2:56pm Fraser announced that he would use his Senate majority to block Supply until the Government agreed to call an election.

“The opposition now has no choice. We will use the power vested in us by the Constitution and delay the passage of the Government’s money bills through the Senate until the Parliament goes to the people.”

“A government that continues to have a majority in the House of Representatives has a right to expect that it will be able to govern.” 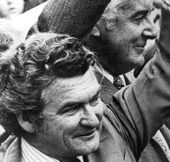 Gough Whitlam and ACTU President Bob Hawke stand united. Hawke promises Whitlam the support of the unions throughout the turbulent weeks ahead. Image courtesy of The Herald and Weekly Times. 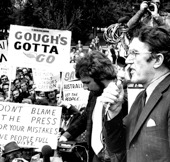 Malcolm Fraser (right) argues that the Whitlam Government has been the most incompetent in Australia’s history. Image courtesy of News Limited. 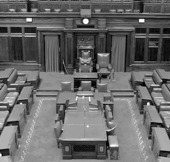 The Senate Chamber, Parliament House, scene of the start of the political crisis of October – November 1975. Museum of Australian Democracy collection.