From 13 October – 11 November, the @MoAD_Canberra Twitter feed will go back in time to mark the 40th anniversary of the Dismissal of the Whitlam government.

In 1972, following twenty-three years of Liberal-Country Party Government, Australians decided ‘it’s time’ for change. The Labor Party was swept into Government on a wave of popular support. Three years later, Labor’s period of Government was abruptly terminated amidst a storm of controversy. It was three years marked by rapid change in Australian politics dominated by larger-than-life personalities and the political circumstances of the time.

The drama of the events leading up to the dismissal of the Labor Government in 1975 and the subsequent landslide victory of the Liberal-Country Party in the election of December 13 of that year were played out in the corridors, offices and chambers of this building. In many people's recollections, the events of 1975 are linked inextricably with the building itself.

Leading up to the dismissal were a series of events from as early as March 1974 until September 1975 that served as a prologue to the high drama of 11 November 1975. These events included the ‘Loans Affair’, ministerial sackings and resignations, the rise of a new Opposition Leader, Malcolm Fraser, and the appointment of a new Governor-General, Sir John Kerr.

The first act in the drama saw the Senate, controlled by the Opposition, block Supply of the Government’s budget bills. This was done in an effort to force Prime Minister Gough Whitlam to call an election. When Whitlam refused, a deadlock ensued. In the second Act the Governor-General, Sir John Kerr, entered the drama as he considers his role in breaking the deadlock.

“Ladies and gentlemen, well may we say ‘God Save the Queen’, because nothing will save the Governor-General.”

Listen to Gough Whitlam’s now famous address following the dismissal of his government on 11 November, 1975

Act three, November 11, 1975, saw the Governor-General take action and dismiss Whitlam and his government. For many Australians the day of the dismissal is remembered as a moment of unique drama in their lives. To them, it shaped their political attitudes and changed their understanding of how the political system works in Australia. For politicians on both sides, it was to be a watershed in their political fortunes.

This action by the Governor-General was the penultimate climax to the drama, but the crisis was not resolved until the end of Act four—the federal election of December 13, 1975. This saw the complete rout of the federal Labor government in what Malcolm Fraser called “the biggest shift in public opinion in Australia’s history”. 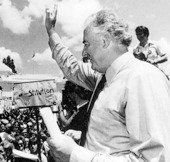 Gough Whitlam addresses the crowd at the front of Old Parliament House following the dismissal of his government on 11 November, 1975. Image courtesy of the National Library of Australia. 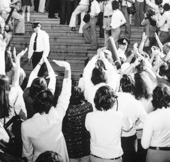 The crowd at the front of Old Parliament House following the dismissal of the Whitlam government on 11 November, 1975. Museum of Australian Democracy collection.