The Labor Party recognised it was difficult to campaign on its record. Instead their campaign focused on the dismissal and the perceived threat to democracy it entailed. Part of this focus attempted to undermine the credibility of Malcolm Fraser through accusations of complicity in the dismissal. This was expressed through their slogan ‘Shame Fraser, Shame’. They advised Australians not to place their trust in Malcolm Fraser, calling him a deceitful and dishonest character who acted according to self-interest alone. Whitlam argued that:

“A great wrong must be set right. Only the people of Australia can do it, and they will. The shame must be wiped away…Parliamentary democracy as we know it must be saved…”

The Liberal and National Country Parties had been planning their election campaign for some months. Within days of the election being called, radio and television commercials were being broadcast around the country. Their slogan was ‘Turn on the Lights’, which argued that the three years of the Whitlam Government had been the darkest in Australia’s history. Their campaign centred on issues of economic mismanagement, high inflation and unemployment, and accused Labor of incompetence, impropriety, scandal and abuse of power. Fraser argued that:

“This election is about the way Labor has been destroying our way of life. We sought the election so you could choose the way of life you want.”

After a month of intensive campaigning, the outcome was in the hands of the Australian people. By 9:00pm, three hours after polls closed, the result was clear. The Coalition of Liberal and National Country Parties had won by a massive landslide—the most comprehensive in Australian federal history.

“A great deal of responsibility has been placed on us. There’s a tremendous task of rebuilding, looking forward to the future, creating a government that will govern for all the people of Australia.”

Prior to election day, the Labor Party held 65 seats in the House of Representatives. By the end of the day they had lost 29 of those seats to the Coalition. Malcolm Fraser and Doug Anthony now had an unprecedented fifty five seat majority in the House.

Malcolm Fraser and the Coalition also secured the Senate majority that Gough Whitlam had always sought. With a clear majority of eight seats, safe passage of the new Government’s legislation was guaranteed. 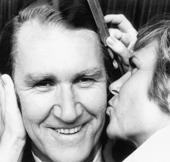 Malcolm Fraser and a supporter prior to his victory speech. Image courtesy of The Age. 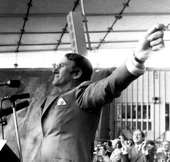